Our monthly newsletter, The Messenger, is still a vital publication at St. John United Church of Christ. It continues to be available the first Sunday of the month. Although it is sent out electronically, many copies are made available in the sanctuary.

The History of St. John's Messenger

"The “Messenger” is the official organ of St. John’s Evangelical Church. Its first issue appeared on Easter Sunday, April 3, 1896. When the project of its publication was at first discussed, it was met with some opposition and with much indifference. It was permitted only under the condition, that no financial obligation should thereby be imposed upon the church treasury. This condition has been respected throughout the eight years. Never has the Messenger cost the church one cent; on the contrary, it has, during its short life, paid $213.65 into the treasury of the church. There is no longer any opposition to it, but it is generally welcomed and eagerly read by our people. In fact, it has become a necessary factor in the work of our church.

In the first year of its publication the Messenger was a very modest little sheet. At the expiration of one year it was enlarged to its present
size of eight pages, with three columns to the page, and an occasional supplement. It is distributed gratis of the church doors on the first Sunday of each month. If sent by mail, the subscription price is 25 cents a year.

For one and a half years it was printed in the establishment of Mr. Jacob Lang. After his death, Mr. Edward Dreier was engaged as its
printer. Since October, 1902, the technical work is done at the job office of the “Louisville Omnibus.” It is issued in one thousand copies monthly, and the total expense of its publication is defrayed by the advertisements of liberal and progressive business men. Its present electrotyped “head,” or title, was adopted in April, 1899. Theretofore its title consisted of plain, large type.

From the day of its inception to the present time, Messrs. J. N. Pfeiffer and Theo. Rectanus have been the business managers of the
Messenger. They solicit the advertisements and attend to all collections. The fact that they are reappointed year after year is the best endorsement of their work. A committee of the Y. P/ C/, with Miss Lizzie Buchele as chairman, mails each advertiser and subscriber his paper on the evening following its publication. The pastor of the church is the editor of the Messenger. It is self-evident that all these officials do their work gratuitously.

The Messenger is not only a strong bond, uniting our widely scattered church family, but even keeps the children of old St. John’s in
distant cities and other States in close touch with their spiritual mother. 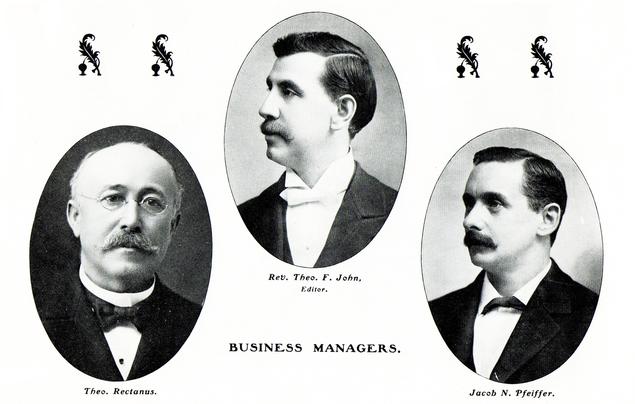